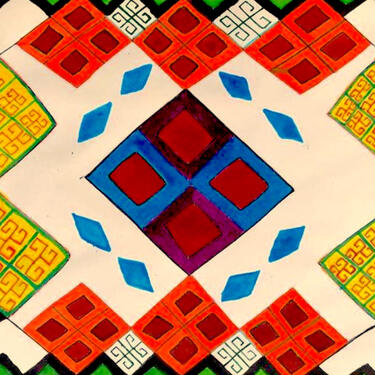 Verónica’s work has been exhibited in international festivals, galleries, museums, broadcast on television and online platforms.

My approach to fieldwork and academic research have been guided by my interests in creative methods such as participatory filmmaking, storytelling, co-designing ritual practices or co-building material structures, and practices of knowledge co-production. My interests include indigenous issues, gender, material culture, migration, and ethnic and religious minorities.

For my PhD I conducted fieldwork with the Huni Kuin indigenous community in the Brazilian amazon rainforest, resulting in a film and series of storytelling performances with Kawá Huni Kuin in Hantxa Kuin, Portuguese and English, in various European locations in 2018 and 2019.
⃟
In an ongoing project, together with filmmaker Helena Inverno, I conducted fieldwork in Portugal on religious rituals and masculinity in the Algarve, Portugal. Part of this research which began in 2013 resulted in a video art exhibition, and the documentary from over eight years of research is due in 2021.

⃟
An exploration into performance led to a fieldwork period and documentary film, co-directed with Helena Inverno, with Portuguese performance artists, Ana Borralho and Joao Galante in Lisbon, Portugal and Helsinki, Finland during the audition rehearsal and performance phases of Atlas, their performance that convocated over 100 people from the general audience to the stage.

⃟
As part of a contemporary dance performance inspired by the growing cases of breast cancer in Alentejo, south Portugal, together with Helena Inverno, I conducted fieldwork and research, on men and women’s perceptions of breast cancer in this region. The outcome of this research was a co-directed documentary that is annually broadcast in Portugal.

⃟
The intersection where prison life and performance meet was the subject of the fieldwork and research I conducted, together with Helena Inverno, in a men's prison in north Portugal. The outcome was a co-directed documentary film that was awarded the prize of Best Feature Length Portuguese Film, Portugal 2012 from 9º Festival IndieLisboa.

⃟
I explored the complexity of Northern European migration to Portugal in my fieldwork and research that resulted in a documentary film.

⃟
What does it mean to be Armenian in Iran? I conducted fieldwork and research, together with Abdollah Guivian, in Iran in 2004 and 2006, resulting in a film and a contemporary art exhibition in London.

Being a Man / Ser Homem
DOCUMENTARY | HD DUE October 2021
Algarvian men speak from their hearts about what it means to be a man today. Filmed in the context of the festival of the Sovereign Mother, Ser Homem reveals the construction of masculinities in the south of Portugal. Co-directed with Helena Inverno.

Elephant in the room / Um Elefante na Sala 64"
DOCUMENTARY | HD January 2016
Lisboners and Helsinkians reveal the power of art for self and social transformation. This performance, which blends the personal, political, professional and artistic, invited 100 Lisbon residents with different professions to perform, what can be called, a choreography of resistance, together on one stage. Co-directed with Helena Inverno. Produced by casaBranca.

Moving forward / Andar em Frente 34'
DOCUMENTARY | HD January 2016
An optimistic and touching film about living life to the fullest. Powerful women in Alentejo break through the silence to speak from the heart about their experience with breast cancer, and their conviction to say yes to life, to move forward (andar em frente). Co-directed with Helena Inverno. Produced by Dansul.

Jesus for a Day / Jesus por Um Dia 71’
DOCUMENTARY | HD | Portugal | 2012
This documentary follows a group of prison inmates as they prepare to perform the annual Easter ritual, the Via Crucis, with a community of villagers in the north east region of Portugal. We witness, from the first rehearsal to the day of the procession, the solemn and surreal moments that lead convicts and members of a rural community to take real and symbolic communion together. Co-directed with Helena Inverno. Produced by O Som e a Fúria, Lisboa.

You Only Wait Once / Uma Só Espera 14’
DOCUMENTARY | HD | Portugal | 2012
This is a portrait of Ti Firmino during a crucial moment of his life: Marquesa and Laranja are leaving. Co-directed with Helena Inverno. Produced by L Praino Project.

Lullaby 23’
DOCUMENTARY | DV | Iran | 2006
Filmed within the context of the Armenian pilgrimage to St Thaadeus Church in Iran, this film explores what it means to be Iranian Armenian, a Christian minority in Iran today. Co-directed with Abdollah Guivian. In Farsi language.

The Force of the Palanquin, Catalogue introduction by Verónica Castro, 2015.

Between now and an Unknown Future, Catalogue introduction by Verónica Castro and Abdollah Guivian, 2012.

Interview with Dimitri Chulakov on the making of the fim, Jesus por Um Dia, Museum of Contemporary Art, Perm, Russia, 2012.

Yube Inu and the Sacred Beverage, with Kawá Huni Kuin, indigenous storytelling performance, in various locations in Portugal and in the UK, 2018, 2019.